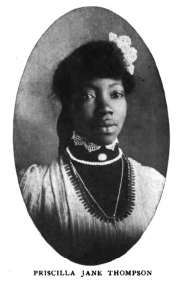 The daughter of two runaway slaves, Priscilla Jane Thompson wrote and self-published poetry to inspire the Harlem Renaissance all the way from Rossmoyne, a neighborhood in Cincinnati. Inspired by the stories of her parents and other black folks in the Cincinnati area, Priscilla wrote cutting verses on slavery and the injustices that survived with abolition. Her poetry as a whole would be considered an ode to the wisdom and beauty of the black woman.

John Henry (b 1822) and Clara Jane Thompson (b 1836) were born in Virginia as slaves. Sold to a Kentucky plantation owner, they started a family and eventually escaped slavery to Cincinnati’s Rossmoyne. The Schencks, who helped them escape on the Underground Railroad, gave them a parcel of land and work. The danger presented to them by the South was not over. The Schencks received advanced warning and prepared for the coming of Morgan’s raid to their doorstep on 14 July 1863. They hid the Thompson family in their parlor room with two of their valuable Spanish horses.

Here, John and Clara had Priscilla Jane in 1871.* Priscilla. John and Clara raised their children to be educated and immersed with the arts. By 1880, Clara Jane had died, and a woman named Mrs. Polly Dixon seems to have stepped in as a motherly figure for the children, as evidenced by one of Priscilla’s poems “To a Deceased Friend” written in her memory. Their older brother Garland took the place of their father, though their father was living, as was customary in Victorian society.

After school, Priscilla trained to be a teacher but could never do so due to ongoing sufferings from heart disease. She did manage to teach in some manner with Sunday school at Zion Baptist Church. Instead of teaching full-time, Priscilla began writing and reading her work in the area. Priscilla lived with her siblings Garland, Clara, and Aaron. Providing a steady income, Garland continued to work with the Schenck family and learned the trade of concrete finishing and wood sculpting in doing so.

Using Aaron’s printer in that house, Priscilla self-published her first book Ethiope Lays in 1900 and dedicated it to her “best beloved” brother Garland, her “friend and warder.” Priscilla and her siblings avoid any contest of authenticity and sole authorship by self-publishing. They’d learned from the doubts of their predecessors.

Priscilla’s influence began spreading throughout the Midwest. Her brother Aaron, a popular poet in Indianapolis, asked her to perform their poetry and other popular poets’ poetry with him on Monday, 27 June 1904, at Mt. Zion Baptist Church in Indianapolis. He regularly featured his sisters, including at Emancipation Day celebrations, a holiday to celebrate Emancipation, or what we now know as Juneteenth. Noted activist Booker T. Washington often was at these celebrations in Indianapolis as the featured guest–the Thompson family’s direct influence on Washington D.C. and the Harlem Renaissance.

In 1907, Priscilla released her second collection called Gleanings of the Quiet Hours. In her introductions, Priscilla makes her intent for writing known: to being true black characters to life with honesty and depth. She was responding to the stereotypes and racism embedded deep into American society. Her voice is assertive and rhythmic, adaptive and timeless, urgent and restless. She subverts white literary tradition in a variety of ways, using the love ballads of traditional Anglo folk tunes and legends and adapts them for the Civil War and black community. In doing so, she gives even more drama and danger, transcending racial barrier to show a common lineage while also invading the literary world to fight for the black woman’s place within it.

After Garland died, he left the house to Clara Ann, who now had to care for Priscilla herself, whose ailments were more frequent. On 04 May 1942, at 7:19 am, Priscilla died of a “cerebral hemorrhage” at the age of 71. She was interred at the Colored American Cemetery, or what is now the United American Cemetery. As the last surviving sibling, Clara Ann bought one tombstone for her four single siblings buried at the Colored American Cemetery: Garland, Samuel, Aaron, and Priscilla. A year later, Clara Ann would still sorely grieve, buying an ad in the newspaper to dedicate her deep loss for her sister who died a year past. They had spent their entire lives living together, not just as sisters but best friends.

After her death, Priscilla’s work still never truly saw widespread admiration. She was published in a couple anthologies but didn’t get the recognition for her contribution to the literary field and a brave, bold new movement that swept the nation for civil rights. Priscilla’s work served as a bridge between the Civil War and civil rights, not living to see either but affected by the former and affecting the latter.

Read her work: Ethiope Lays and Gleanings of Quiet Hours.

Want to take a Priscilla tour in Cincinnati?

Nothing of Priscilla’s known life stands anymore. But if you want to see where she would have written and read her poetry, while enjoying some local establishments, follow this path:

The Schenck house, where Priscilla’s parents and older siblings hid from John Morgan’s troops. Please leave the tenants alone and view from the sidewalk.

This is where the Thompsons owned property. Taken from Google Maps.

The plot of land where Priscilla first lived with her parents and soon lived with her siblings. These are not the houses as they were then. Taken from Google Maps. 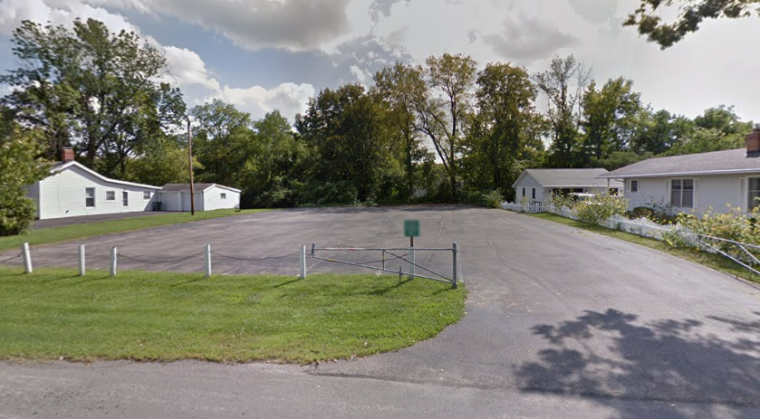 The site of the Zion Baptist Church the Thompsons attended. Taken from Google Maps. 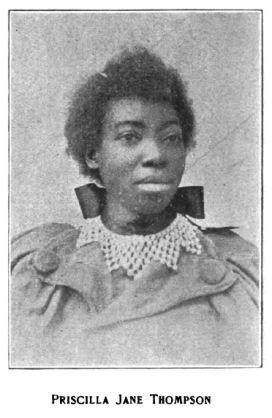 No longer there, the Rankin Bros took care of Priscilla after her death. They were located at 1224 Chapel St. in Walnut Hills. Taken from Google Maps.

The Cincinnati Enquirer’s 09 May 1943 issue saw this ad spot from Clara Ann Thompson.

The gravestone that Clara Ann purchased for her siblings after Priscilla died, located in the United American Cemetery, Photo taken from FindAGrave.

S.E.’s Notes: *Most sources claim Priscilla’s birth as 1871. However, her death record says she was 64 at the time of her death, which puts her birth at 1878. The information relayed to them was apparently from Clara Ann, who also said their father’s name was Garland. This contradicts all the census records tracking her age but puts forth a notion that Clara Ann was also suffering from memory loss in her advanced age.

Concerning photos: All photos are taken/owned by Queens of Queen City or given permission for use here only and are indicated when originating elsewhere. Please do not reproduce without our consent or the originators’ consent, respectively.

This page is composed by S.E. Andres.

I spy with my little eye fun stuff at my favorite bar. #homehunt19
Sarah Piatt was also from the lineage of Boones and Bryans who fought against indigenous peoples from the east coast to Kentucky. She also married into a family who fought against the indigenous peoples of Ohio, later settling on Miami land, which had been colonized by William Henry Harrison--land now known as North Bend. Sarah seemed to sympathize with the native populations, though, writing this poem for the Louisville Journal in July 1857. #NativeAmericanHistory #poetry #NativeOhio #Indigenous #SarahMBPiatt #Louisville
I visited Sarah Piatt's grave yesterday to recite her poem "A New Thanksgiving," recognizing its power today, though published in 1910 and likely written from her home on occupied Miami land, now known as North Bend, Ohio. #SarahMBPiatt #womenshistory #Cincinnati #cincygram #poetry #thanksgiving #dayofmourning
Did you miss last night's Spooky Stand-Up History? Here's S. E.'s tale of Seussian names, murder, and mystery for your Halloween fright. Meet Ora McKee at the link in bio. #1890s #1800s #murder #mystery #crimes #OraMcKee #OraBuice #RomeGA #Georgia
I guess I shouldn't tease goats and not give good goat. So here's a goat! #goats
Planning meeting, post-goat glow.
%d bloggers like this: