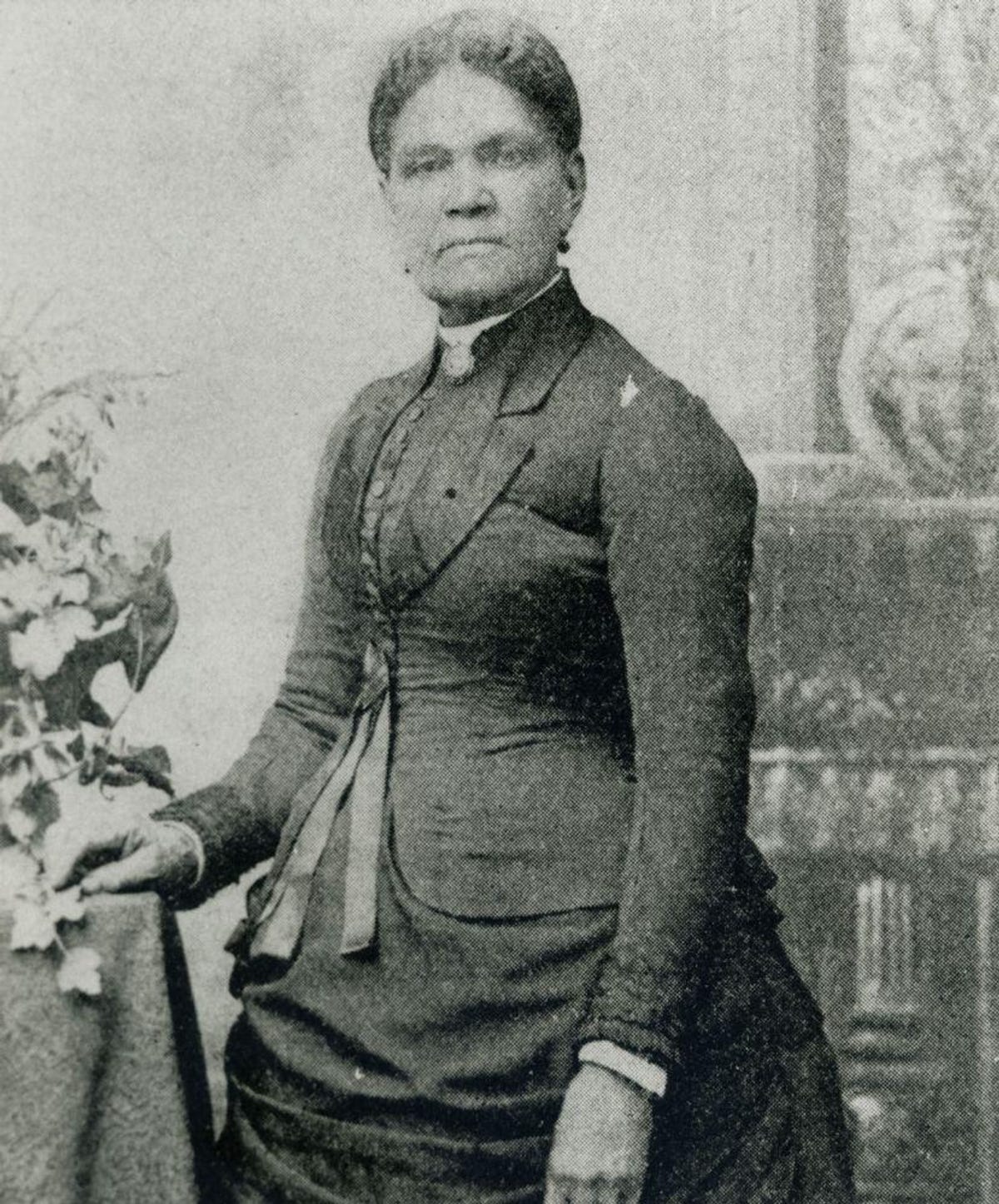 Born in Charleston, South Carolina* to Rufus and Judith on 26 June 1826, Sarah, a “noble, lovable character,” had been born enslaved. As a young girl, Sarah was sent to New Orleans. There, she studied under a French hair specialist the art of hair and scalp treatment and hair goods manufacturing and application.

In the 1840s, Cincinnatian Abraham Evan Gwynne brought Sarah to Cincinnati around the time of his daughter Alice Claypool Gwynne’s birth. Alice, Gloria Vanderbilt’s grandmother and Anderson Cooper’s great grandmother, would later build her own dynasty. But this is Sarah’s story dynastic story. Through the Gwynne family’s influence and connections (including the Storers), Sarah networked to build her own hair salon empire for the rich as the best hair stylist in Cincinnati.

On 28 September 1854, Sarah, 28, remarried a 39-year old white washer and caterer by the name of Peter Farley Fossett, who had been born into enslavement at Thomas Jefferson’s Monticelllo, along with his entire family. They were true equals in marriage and equals as business operators in their own companies. Sarah never learned to read like her husband had in his youth enslaved by Thomas Jefferson. That never stopped her from being an absolute success, but Peter taught her to read and write over the years, which would only make her more successful.

Sarah’s mother-in-law Edith brought French cuisine to the masses in the U.S. Learn about her influence on Cincinnati and the country.

Peter and Sarah, living at 46 Race St. in Mary Liverpool’s tenement, were closely associated with Levi Coffin and others in the Underground Railroad. Peter served as one of Coffin’s lieutenants, being a stop for runaways before sending them to his home. Sarah and Peter lived and worked under dire and dangerous circumstances, especially as Black people who didn’t have the luxury of simply paying a fine like white people would for harboring fugitive slaves.

The couple attended church at Baker Street, now called Union Baptist Church. There, Peter served as clerk and trustee. He surveyed and bought the land for the church cemetery on the west side, which is now known as the Union Baptist Cemetery, where they both are buried. Peter then was elected to the board of directors of the Colored Common Schools Western District in 1858. It was at this time that Peter and Sarah took their local abolition actions as major players of the Underground Railroad to the state and national level. Peter attended and Sarah contributed funds to (and maybe attended) the Convention of the Colored Men of Ohio in November of 1858, pursuing abolition with the likes of Peter H. Clark and Frances Ellen Watkins Harper.

Cincinnati held esteem for its streetcars, which were touted for their cleanliness and comfort, except for those pesky women and their giant dresses taking up multiple seats. However, Cincinnati’s Passenger Railroad Company (PRC) instructed its conductors that no “colored people” were allowed on. Sarah, late to an appointment to fix the hair for a bride’s wedding, decided to take the Third-street line streetcar to get there faster. It stopped near the Burnet House, and a white lady stepped off. Sarah tried ascending onto the platform but was stopped by conductor. He tried to push her off, but Sarah held onto the rails as the horses kept moving on. Sarah gripped tightly, fearing of the fall while in motion, while the conductor battered her hands to remove her. She tried to bite his knuckles as he tried to pry her hands off. Eventually, after three blocks, she let go, suffering injuries, laid up for three days after. Sarah sued the PRC, claiming $1,000 in damages. The PRC claimed Sarah never got on the platform (so they aren’t responsible for injury on their property) and claimed that the car was already in motion when she jumped to hold onto the rails. She didn’t receive the $1,000; however, she did receive $65 for being refused passage.

As a result of the case, Black women and children were legally allowed to ride inside, while Black men could ride outside on the platform. Two years later, that law was used in Isaac Young’s case against the Cincinnati Streetcar Company, where the judge ruled that the company went against city law by denying him passage. Judge Bellamy Storer, who knew Sarah and her integrity through his former law partner Abraham Gwynne, made it clear that all persons, regardless of color and sex, were to be permitted on streetcars, unless they are drunk, are a criminal, or are suspected of crime.

Peter began going to Baker Street Union Baptist Church and served as clerk and trustee. In 1864, Peter surveyed and bought the land with Sarah for the church cemetery in Price Hill, which is now known as the Union Baptist Cemetery. In 1870, Peter became an ordained minister through the Baker Street Church and began taking on leadership roles in the church. In 1873, Peter. H. Clark introduced Peter Fossett as the board-elected president of the Zion Congregation, later becoming pastor. While their careers and names were thriving, so was their daughter Mattie’s. Mattie began officially working with her mother as a hair dresser at home, even after her marriage to Robert A. Whyte in 1879.

In addition to the colored school board, Peter also began serving on the National Prison Reform Congress and University Extension Society. During this time, Peter began rising as a church leader and superstar caterer as the most in-demand caterer in Cincinnati, with cooking learned from his mother Edith Hern Fossett, Thomas Jefferson’s enslaved head chef. He even catered two weddings on the same day of 29 Oct. 1878.

Peter organized a new church as the first pastor of First Baptist Church of Cumminsville in 1879, a new branch of the Baker Street Union Baptist Church. Sarah and Peter slowly moved into the church living quarters at 15 Stone. They didn’t take an income from the church because he already had one as a caterer to the rich and famous and she had one as the premiere hairstylist to the rich and famous. During this time, Peter and Sarah paid off the church debt and accumulated interest. Sarah proved herself to be a leader in faith and community. One such instance where it was noted was the Christmas celebration at the church in 1894, when she was gifted a 186-square silk quilt, with each square representing a student or a friend. She was a pillar and esteemed member of the community.

In addition to being a faith and community leader, Sarah began volunteering for the new Orphan Asylum for Colored Youth. Eventually, the board of the Colored Orphan Asylum elected her to be manager, and she served as such for the rest of her life. During her time organizing for the Colored Orphan Asylum, she raised enough money for a new building. She and Peter were often the biggest donors to the orphanage, while she was also one of the biggest fundraisers. When the new ophanage was built, Booker T. Washington came to town to the dedication ceremony, and Sarah and the others organized an eventful day and dinner in his (and the orphanage’s) honor.

As Peter began “touring” Ohio’s Baptist churches, he became more famous but also remained strict in how people should act in church. “He allowed no concerts or entertainments to be given, saying that his church was no theater,” the Enquirer reported. “When Peter died [in 1901], the church sexton rang the tower bells, and the rope broke and wrapped around him. He frightened off and hasn’t been seen since,” the Enquirer reported. This proved local Black Baptist leaders’ fears in leading the church into more entertaining spiritual events and they debated on how to proceed at a church without its foremost leader. For unknown reasons, Sarah had to publicly – not just legally – declare that she was executor of Peter’s estate. “I HAVE BEEN APPOINTED AND QUALIFIED,” she stated in all caps.

So central to the Black community were the Fossetts that the Black hospital had been named after Peter. In March 1904, the physicians of the Peter Fossett Memorial Hospital established a drugstore for the Black community. I can’t think of a better family to honor health and wellness in a community than the Fossetts, who had dedicated their lives to saving people in this life—and the next.

Sarah died on Sunday afternoon, 2 December 1906, from nephritis. Funeral services were held on the 6th at 10 a.m. at the First Baptist Church in Cumminsville. She is buried with Peter and his mother and father at Union Baptist Cemetery in Price Hill. Where Peter left her with wealth, she gave almost all of it away since his death to the church and orphanage.

Over the years Sarah and Peter had four children, with one surviving Sarah—Martha “Mattie” E. Whyte O’Bannon Kelley. She had two foster daughters, Mrs. Sarah Porter Anderson and Mrs. Clara Porter Nelson, who are Sarah’s great nieces. Sarah and Clara’s brothers Peter, Charles, and John Sidney Porter also survived Sarah. Sarah apparently had two other daughters from her first marriage: Mrs. Bessie Curtis and Mrs. Isabelle Butler. (I’m trying to verify this and track them down and will update when I find out.)

*It’s hard to tell whether she was born a Mayrant or a Walker. It’s possible the Mayrant family had enslaved her family and she had inherited their name. Alternative spellings for Mayrant are Morant and Myrant. Her birthplace often changes in the census records, from South Carolina to Louisiana, but it’s almost definitely South Carolina.