As part of our series on Cincinnati’s beer baronesses, Chelsie introduces the series and focuses in on the one and only Marianne Kauffman–uniting matron of the Kauffman clan and savior of the Kauffman Brewery.

Margaret Atwood, celebrated author of The Handmaid’s Tale, said it best when she posited that women’s history lives in the space between the stories we know. What does that even mean? Well, when you find yourself reading an article in a magazine or perusing a book, you will find the facts you read chiefly concern men and their contributions. If one looks for a woman’s story, so often, they have to look in between the words for what goes unsaid. While Queens of Queen City is dedicated to celebrating the untold stories of the women who shaped and influenced the greatness of our city, the further back we travel, the harder it often is to knit together the scraps of information we have about the women whose genius was the critical component of one of the city’s major industries.

Of course, I’m talking about beer.

At one time, Cincinnati drank two and a half times the national average of beer, owing not only to the quality of 19th century water, but also the gemütlichkeit that was known to reign in Over-the-Rhine. You could visit Vine Street and enjoy fresh, frothy and local beers with the locals as well as unique figures whose names have become legendary in certain circles. But this industry – this good time feeling – was built on the back of the brewing industry. Those who travel in historical circles (or craft beer circles) have heard the names: Christian Moerlein, John Hauck, William Sohn, John Kauffman, and more. But I posit that their contribution is not the only worth celebrating or knowing; the Beer Baroness must be praised as well.

That’s why we’re going to post a series of articles dedicated to the Beer Baronesses of Cincinnati; the women whose genius and influence silently shaped the way we talk about beer today.

First up, let’s go with Mary Anna – or Marianne – Eichenlaub Kauffman. Marianne, born into brewing heritage through the Eichenlaub family, is characteristic of how marriage was transacted in her time period. She married her father’s business partner, John Kauffman. These men would eventually be two of the three who began the Vine Street Brewery which would later become the John Kauffman Brewing Company. I want to keep the story centered where it belongs so I encourage you to read more about George Eichenlaub, John Kauffman, and their business partner Rudolf Rheinbold. After her marriage to John, we can posit from the historical record, that Marianne spent much of her time managing and building the Kauffman home. We also know that she began to bear children, amass (and manage) property, and develop a reputation for being charitable and kind. Three of her nine children made it to adulthood and all were eventually involved in the running of the family business — the John Kauffman Brewing Company (JKBC).

Marianne’s life took at turn in 1892. While John had spent much of his time in travel, attempting to take his product down the Mississippi River, it was a far less arduous trip that would prove his undoing. After visiting family in Pennsylvania, he returned home ill and passed away suddenly. Marianne was a 49-year-old widow with a thriving business and responsibilities, all during a time when it was frowned upon for women to be outside of the domestic sphere, manage a business … and let’s remember they certainly couldn’t vote. During this management, Marianne was made aware that the JKBC was in dire financial straits. In order to grow the brewery, hundreds of thousands of dollars were borrowed to bring technology, property and workers in. And under Marianne’s care, the debtors came calling. In order to protect the business, the brewery was placed into receivership with her son-in-law Emil Schmidt (sometimes spelled Emile Schmitt) and son John R. Kauffman.

In addition to the money the business owed, the George Slimer estate sued Mrs. Kauffman for $5,000. (By the way, George Slimer was an interesting fellow and one of the founding members of the Cincinnati Stockyards Bank.) Taking her real estate portfolio into account, she sold significant amounts of property in Clifton Heights and added in her own personal money to pay off the debts — all over $150,000. Today, that would be over $4 million. Yes, that’s million. Marianne Kauffman, owing to her business acumen and her wit, was able to save the JKBC and protect her family’s legacy. During this time, the brewery flourished. By 1894 it produced over 70,000 barrels of beer per year as the 4th largest brewery in Cincinnati. Gilt Edge Lager and its like also found their way south, down the Mississippi as the product was shipped beyond the borders of our fair state, too. The JKBC remained in business until Prohibition shuttered it and all equipment was sold in 1920.

So obviously, together with John and Emil, Marianne’s stewardship of the business reaped many rewards for the family. The regional Brewer’s Directory indicates that in 1902, Marianne was officially named as president of the JKBC. Interestingly enough, she was not called Mary Anna, Marianne or even Mrs. Kauffman. The directory indicates that the Brewery’s President is M.A. Kauffman. Did this owe to the family’s scandalous few years as they legally rectified their debts? Or did it indicate a thoughtful acknowledgment of 19th century gender roles and an attempt to mask Marianne’s sex? Maybe it was both. Nevertheless, M.A. Kauffman was at the helm.

Advancing age and its infirmities eventually caught up to Marianne. Diagnosed with Diabetes, she would eventually have to face the choice of going under a surgeon’s knife. She spoke with her son, who begged her not to undergo surgery to have her leg amputated. She persisted, however, out of what I think was a need and a desire to survive. Marianne agreed to the surgery. Unfortunately, she would not survive it. The newspaper indicated she died of shock after the surgery. Her family and her brewing community mourned her passing citing her intelligence, charity, and her kindness.

Over 100 years later, we can still visit several of the buildings Marianne saved. It is those buildings — and the people who filled them with their own dreams — that birthed the craft beer revolution in Cincinnati. So whether you find yourself at the Christian Moerlein Brewing Company on Moore Street or under the foundation of the Guildhaus, touring the original lager cellars, raise your glass to Marianne Kauffman. 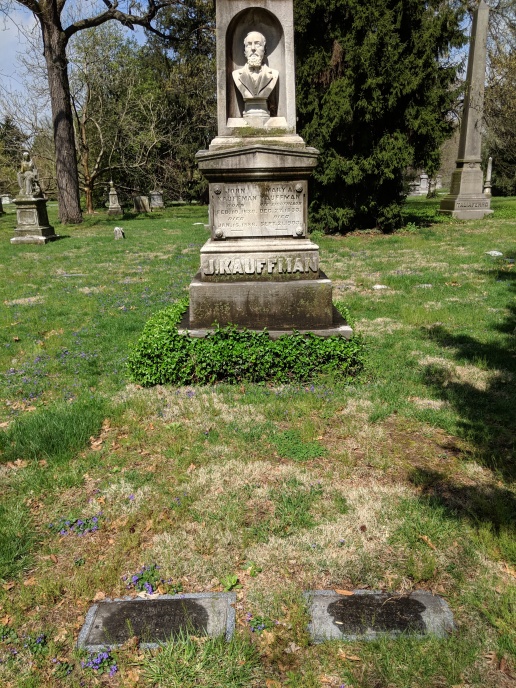 As we continue our series on Cincinnati’s Beer Baronesses, we want to tease what we’ll be chatting about in the coming weeks. The Kauffman family didn’t only boast Marianne — there’s a French songbird in their midst who requires that attention be paid. We want to talk about the dynastic Oehs, Sohns, and Jungs. We’ll also be traveling across the Mill Creek to tell you about some of our West Side Baronesses, too. So keep reading. We’re excited to share with you.

Facts in the article were accessed from:

This page was written by Chelsie J. Hoskins.

One thought on “Marianne Eichenlaub Kauffman”